Happy Herbivore Abroad is up for grabs!

Lindsay Nixon’s third cookbook includes 135 easy, delicious, and unique recipes from around the world, many of which can be made with everyday ingredients already found in your pantry. In Happy Herbivore Abroad, you can also find the influence of Lindsay’s international travels – Lindsay has lived in eight states, visited 46, spent a year as an expat on a Caribbean island, and traveled to more than 35 places abroad. From Thai Pineapple Curry to German Potato Salad to Moroccan Vegetables, the variety of recipes in Happy Herbivore Abroad is delciously surprising while all are healthy (fat-free or low-fat), simple, and made with whole fresh ingredients – all things we’ve grown to expect from Lindsay’s recipes. 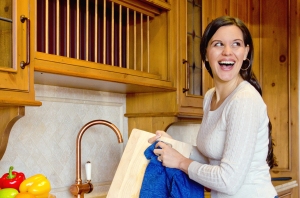 The contest is only open to US and Canadian entries. The deadline for entry is midnight on Tuesday, May 21st. I will choose the winner randomly on Wednesday, May 22nd.

Good news for fans of the plant-based/undead cooking show “The Vegan Zombie” – a recipe book is on the way.

In an interview with Syracuse.com, the popular YouTube series’ creators, Chris Cooney and Jon Tedd, have revealed that a cookbook featuring 75-100 vegan recipes will be released this fall. Even better, the tome will include chapters in between the recipes that graphically illustrate just how the zombie apocalypse happened.

“It’s not just a cookbook, it’s also a graphic novel, like a comic that tells the story of ‘The Vegan Zombie,’” Cooney explains. “It’ll tell what the story is for the people who can’t wait for the movie to come out.”

Movie? That’s right – a feature-length film is also in the works.

Expect a Kickstarter campaign in the coming weeks to help fund the new cookbook.

“It’s not just for vegans, it’s for meat-eaters, for vegetarians, people who want to be healthy, people who love the horror genre,” Cooney tells the site. “There’s a lot of people who say ‘I’m not vegan, but I love your show.’ We welcome everybody. It means a lot to us when somebody says ‘I eat one of your meals at least once a week’ so we’re doing our part at least one day a week.”

For more on “The Vegan Zombie” check out their official site here.